my bear speaks in gibberish. it wouldn’t be such a big deal and worth writing about if the kid wasn’t so bloody annoying with it. he talks in gibberish to everyone and it is especially annoying when i am trying to get some information from him. for example, “do you want milk or water with dinner” and in response i hear “ablibaba digadogy”. i know, i know he’s three and this behaviour is normal and it too will pass and he’ll outgrow and forget all about it. i know he’s probably looking for a reaction from me and pushing my buttons or he’s regressing as his baby brother speaks in baby talk and we all respond as though we understand.


it’s frustrating because bear is very articulate. when he talks in english his vocabulary is extensive; i say this with obvious bias in mind but, others have also commented on his language skills. his finnish is not strong and that’s my fault (insert a million kilos of mother’s guilt here). but back to the gibberish… i’m not really sure what to do about it. it is infuriating when i am trying to talk to him or ask him something and i hear “are you bilagie sihd bibibibib-ta?”. argh: hear mama roar! and the weird thing is, he doesn’t use random sounds, it’s like he’s made his own language as he makes the same sounds over and over again, which eventually we have come to recognize. 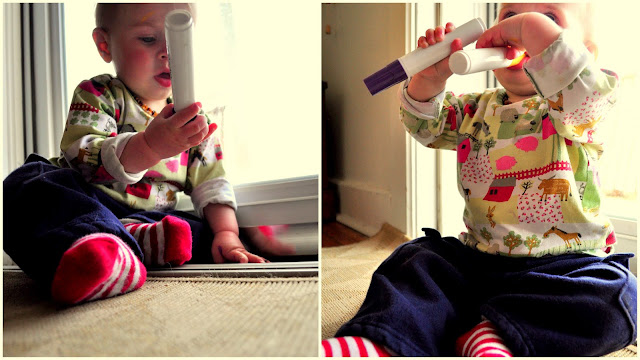 we adore window markers. we have one of those all glass storm doors and have been trying to use the cool, rainy days creatively. drawing and colouring are two activities that bear loves, and on this creative afternoon lion did some serious bold strokes with a yellow marker! so fantastic!


and after the rain… 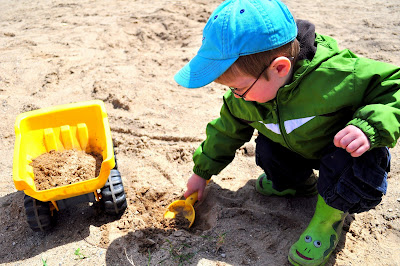 … the glorious sun was out all day warming and shining down on us. we took full advantage of this weather phenomenon and spent most of the day outside. we even left dirty lunch dishes in the sink to be dealt with later! this spring has been very wet and rainy, so it’s been hard to get outside. now, don’t get all “if you dress them right” on me, because yes, we have rain gear and do go out in the rain, but it’s hard because of my non-walking, shuffling around on his butt lion. the rain is difficult for him to manage. so, today we played hard in the sun making up for lost outdoor time! 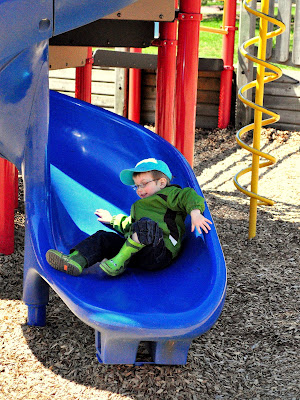 bear is going though a fire fighter stage. he has been playing fire fighter at home, building trucks out of furniture and pillows. i am often told i am a fire fighter as well. bear’s imaginative play is exploding right now, so it was fun today to go and check out some local emergency vehicles on display at the rec centre. it was really hard to take pictures as lion was in the sling, but here is one with the local electrical vehicle and bear standing proudly with his fire chief helmet on. so cute! he was terrified of the actual fire truck and when he was asked if he wanted to check out the inside he panicked. oh well, next time! 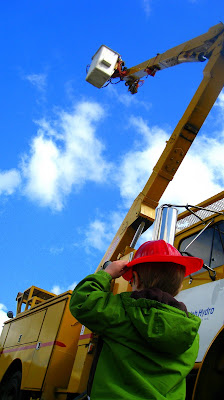 if anyone has any earth shaking ideas on how to get over this darn gibberish phase, please share your wisdom with me. i am losing my mind and cool.
thanks.