i am in a parenting rut, yet again. bear is a growly beast these days and it makes our day to day life quite challenging. i know it’s age related, but i think there’s more to it and that darn mother’s guilt is weighing heavily yet again upon my shoulders. when dear hubby lost his job back in march it really turned our world upside down, again. we had just found a groove and had planned summer adventures, when everything came crashing down, again. thankfully dear hubby has computer programming to fall back on and friends who hired him immediately to do various contract jobs.


even though financially we have felt quite secure, ya know, had money to pay for the mortage, groceries, we have still felt very stressed since the career change in spring. the stress has come from the demanding hours and the fact that dear hubby commutes to the big city twice a week. on those days i’m alone with the kids for 13 hours.


now, i am realizing bear is heavily influenced by this new schedule, as he can’t have breakfast or dinner with daddy every day any more. he feels the void of not having daddy around as much and has no idea how to express or deal with these emotions. instead, he has regressed from the toilet back onto the potty, screams directly into people’s faces, is known for bolting in parking lots, is physically mean to lion and myself, and just doesn’t listen. i realize this is all typical three year old behaviour, but i think for him it is exaggerated due to the stress he feels at home. his sleep habits have changed too. he was napping quite regularly for a while and is asking to be sung to every night, again.

you see, on dear hubby’s commute days i am often low with patience, exhausted and feeling lonely. i try my best to maintain a level or calm and peace, but sometimes i get pushed over the edge. and sometimes, i don’t necessarily take it out on the kids, but instead on dear hubby, which just adds to the mess of stress.
sigh.


on a brighter note, lion started walking yesterday after iltapala (bed time snack). it was a feat we have been waiting for him to conquer, as he has been cruising for months and months. finally he took the plunge, so proud! 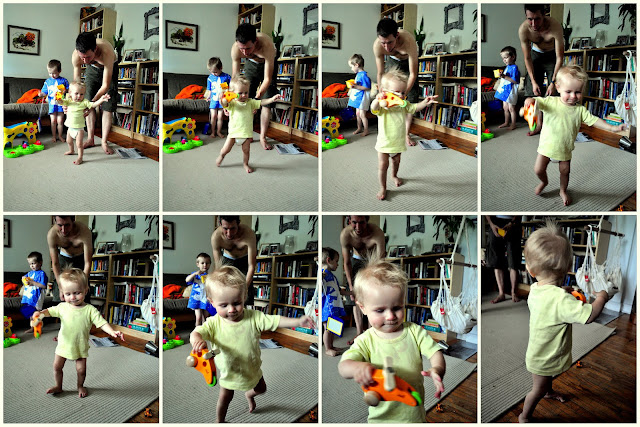 and tomorrow is hillside. bear drew a picture of what some of it may look like: him and lion sitting in the chariot stroller as daddy pushes. he did later add me in the chariot with just one eye! pure genius, but don’t tell him i said that!