the other evening bear and dear hubby were in the kitchen cleaning up after dinner. bear had been really pushing the boundaries that day and by evening he was royal pain with his nonsense! then, there was an abrupt bang, then bone chilling, hair raising screams from the kitchen and dear hubby’s calm words trying to console bear. bear had had his left hand smushed by a window. we have one of those old fashioned windows you push up and then prop open with a stick, and i guess the stick was teasing our three year old and so, yeah, he took out the window support and BANG! it was awful to see him in such obvious pain and i felt like a neglectful, bad parent for opening the window and propping it open like that. of course, we had talked to bear about not touching it and i think right before the incident i heard dear hubby tell bear not to touch… but, so it goes.

we live and learn. we make mistakes, sometimes really painful ones and we move on.
luckily our family doctor has an on-call service, so after icing the fingers and giving bear a dose of acetaminophen, we decided best to call just in case we were missing something. while dear hubby chatted with the on-call doctor, bear and i sat in the playroom discussing the pained incident. he vowed never to do it again and explained that it was a mistake. my heart filled with pride listening to his profound analysis. he obviously needed to debrief the situation, just like me and it was nice to hold him and help him through the intellectual side of the incident. as the drugs kicked in and the adrenalin wore off, bear quickly fell asleep snuggled in my lap. 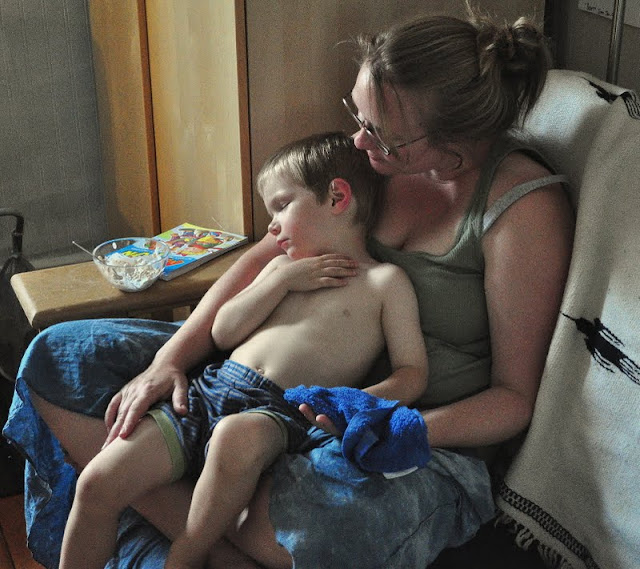 without a peep or complaint all night, bear woke up in the morning in a little bit of pain, but seemed to be in good spirits. with doctor’s orders from the previous evening’s on-call advice, bear and i headed to our family doctor, who was luckily able to see us first thing. she had a quick look at the swollen pinky and sent us for x-rays at the local hospital. my heart sank and i got scared instantly. what would we do if the finger or hand was broken? i felt like crying. but, i held back and we headed to the hospital. there we got the x-rays done quickly without any waiting. bear was scared, but i kept whispering sweet notions into his ear which built his courage, i think. he kept his wee hand so still and moved it accordingly for each set of the pictures. again, my heart filled with such pride.

finally, after waiting for almost an hour we got the all clear: NO BROKEN FINGER! 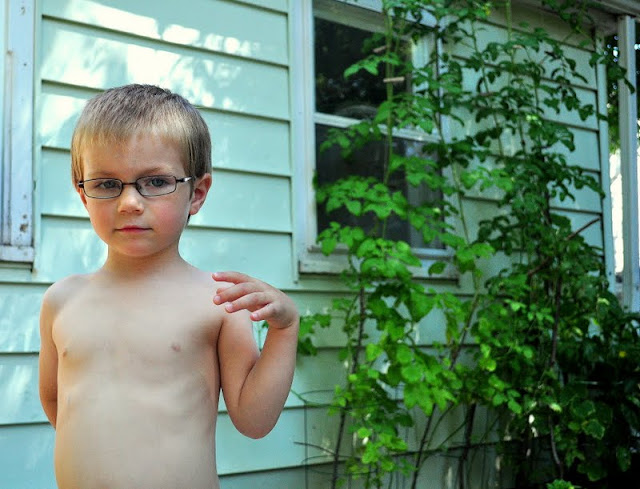 in the afternoon we played outside in the backyard, always very mindful of the painful left hand. bear kept the wrist limp and never even tried to use it for anything. poor fella!