just before mother’s day i wrote about the degradation of mother. now, just days before we celebrate the men who are father’s i will write about the stupidfication of dad. 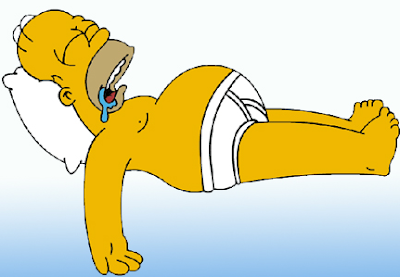 it is everywhere you look, our media is saturated with jokes, sketches, books, tv shows, movies, blogs, characters, art, and so and so on, about the dumb dad. the dad who doesn’t know how to change a diaper, cook a healthy meal, . all he knows how to do is drink beer and sit in his man cave, while fearing his wife will find him and make him do a chore.

this representation of DUMB DAD infuriates me. the guys i know who are dad’s today, all changed diapers, know how to dress their kids, know how to throw together a healthy school lunch or dinner, and none of the dad’s i know, are stupid. they all make an effort to be good role models for their children, teaching life lessons through activities, conversations and by example. they are respectable, intelligent, and funny men!

dad’s and men weren’t always represented as dumb or incompetent.  back in the day, they were presented at the other extreme of the scale. dad’s were highly respected, highly feared men who ruled their homes. unfortunately, that respect stemmed from fear; children and women were expected to obey the men in their lives, whether they were father’s or husband’s. and if they didn’t fulfill the expectations they would be often be severely punished.

but, over the years the pendulum has now swung to the other extreme of completely disrespecting dad’s.

for examples on how big name brands exploit this notion of dumb dad/ man, check out the commercials posted on this blog, stupid man commercials. or just google “dumb dad” and you’ll get countless hits on the subject.
unfortunately.

dear hubby is not a dumb dad or a stupid man. sure, he makes mistakes and he’s had his fair share of bad decisions  but, so do all of us; that’s all about being human. but, as a father he is quite capable and very hands on. i feel like my kids are very fortunate to have him as their dad.  dear hubby is a gentle, intelligent and very creative man, who is never phased by what other’s think of him!

HAPPY FATHER’S DAY TO ALL THE AWESOME DAD’S OUT THERE DOING THE BEST THEY CAN!