at our house bear and lion are on an upward climb on the developmental ladder. lion is walking so well, and able to climb on and off all sorts of obstacles. he is jabbering a lot and i have heard a few words too, like daddy, äiti and up.he is able to communicate more with incessant pointing and squeaking, which is annoying, yes, but usually gets his needs met. he is also sleeping well in the night and in the morning he climbs out of his own bottom bunk walks down the hall to my room and wakes me so i can pick him up for a morning nurse and cuddle session. it is sweet and lovely.
bear’s vocabulary is booming. today he asked what “adiculous” (ridiculous) meant. he often places an “A” sound at the beginning of words. he is also able to verbalize consequences to actions in a way that i turn around and ask “who told you that?” and he often says “me, i did”. little smarty pants! his memory in frighteningly sharp and he can easily tell me what he wore to so and so’s birthday party or if i promised some specific food for after ballet, days earlier. he remembers who gifted him what and when.
my kids aren’t geniuses or ahead of the norms, but as their mama i am currently bursting with pride as i watch them grow out of babyhood into toddlerhood and from toddlerhood into kidhood. i am understanding the bitter-sweetness of motherhood as my little guys grow. our youngest is not a baby any more, so ideas and thoughts about a third have been dancing in my head a lot lately and this is the conclusion i have come to. at this time i am 32, half done my women’s studies degree and so i have decided to be selfish and take the next few years and focus on finishing my degree. i want to complete it so desperately and was on a roll two years ago, but then i shockingly got pregnant and then even more shockingly discovered my tumour, so my degree got put on hold. now i am healthy and my kids are bigger and i want to at least get the school ball rolling again in january. fingers crossed!
my hope is that my kids one day look back on their childhood and feel that tingly sensation for me. i want them to recognize the sacrifices i made for them and the success that ultimately evolved from them for them and for me. i want them to burst with pride.

i am feeling pretty guilty right now. 24 hours ago i wrote an entire entry about the eye patch bear has to wear and the inevitable fighting that would ensue. well, today my three year old superstar kid wore the patch for over the expected two hours and never once complained. he got busy and wrote some names with these tiny letter stickers my mom gave him a while back. he was so focused on the task at hand, that i guess he just forgot about the patch. i was bursting with pride watching him!

but, now i feel guilty for not giving him a chance to really wear the patch and get used to the whole thing. 24 hours ago i ragged on him and was mentally preparing myself for a daily fight, with visions of having to sit on him to get the patch on! not to say it will always be easy and that he’ll never oppose the darn thing, but i really have to give credit where credit is due. my bear, my oldest kid, my three year old is an amazing kid. i am exploding with pride! today was also bear’s first day back at pre-school. he is a seasoned student as he is going into his second year at the school. he chose his own outfit to wear and looking sharp as pie, he smiled all the way to the school. as we were saying good-bye his nerves kicked in and his chin crinkled up and he was almost in tears. but, we just got outta there leaving him in the loving arms of one of his teachers. at pick up time, 3 hours later, he was smiling and happy to see lion and i. he told us all about school and as we were leaving the classroom his teacher said bear had a wonderful morning.
again, exploding with pride. 24 hours ago i was counting down to the arrival of our new fridge. well, it arrived at 5:45pm, in the middle of dinner, but no interruption could have been more welcomed. our new fridge purrs the softest sound and i keep wondering if it’s actually on. but, it’s cold inside so i guess it’s all stations go!

i have had a challenging summer parenting my three year old bear. although we have experienced many joys and made lots of happy memories, there have also been a surprising number of tantrums and tears (shed by both of us). as i have tried to problem solve our way through this tangled mess of power struggles, i have felt quite hopeless.

but now, half way through august i see a light at the end of the tunnel. september is around the corner and with it comes routine. i am hoping the predictable nature of our weeks and days will bring with them peace and calm as well. bear will be returning to pre-school; a place he learned to enjoy and feel safe at. as i have said before, i feel eternally grateful for his lovely teachers, amy and stacy, who have helped him find independence and gain skills. bear will also be starting ballet classes, which he has been waiting for for many months.

just like my kids, i thrive when i know what’s going on and know what to expect. i am a planner at heart and like to commit to things, whether it’s play dates with the kids or coffee with friends. i am hoping the cooler temperatures will bring with them some mama-inspiration. my family dinner plans have been placed on hold as our summer schedule has not allowed for the planning these meals deserves. also, with the outrageous heat waves that passed through in july, i tried to limit the use of the stove and oven so as not to heat up the house more. come september, family dinners will be back on!
i also have a basket of sewing projects waiting to be tackled. nothing too exciting, but clothes that need to be mended or adjusted to fit growing bodies. i just haven’t had the time or interest during these warm summer evenings.


as august rolls along, i am trying to enjoy the last few weeks of warm weather without wishing away the end of summer. we still have many adventures to take on and projects to tackle. but, like bear, i am looking forward to a cozy canadian winter!

i am certain fall’s cooler winds will bring the change we are so desperate for.

bear has been attending a lovely pre-school since last september. as some people may recall from my facebook statuses, it was a difficult transition for bear to make. there were buckets of tears and gallons of “i don’t wanna’s” and hours of fighting getting him strapped into the dreaded car seat.
but, then one day it stopped being a battle and he started asking to go to pre-school. in the mornings he was easier to dress and get in the car, and there were no tears. well, certainly not about going to school, perhaps about having to wear shoes or whatever.


bear was tremendously lucky as he had two amazing, loving and committed teachers who helped him find his independence. remember, he was only two-and-a-half when he started with a brand new baby brother at home and mama who had been away after the birth. plus, we were still in the throws of toilet training, so we were all quite emotional. bear’s teachers acknowledged his sweet, quiet side and let him be silent for months. apparently he never spoke until after christmas! shocking!
but then the flood gates opened, even at home and all of these songs and stories about his friends at school came rushing out. bear had found confidence in himself to share with us parts of his life that do not really include us. pre-school is his own thing.

well, today after months of heading out on tuesdays and thursdays, was the big GRADUATION celebration. it was the loudest, cutest and most chaotic event ever! unfortunately due to the rain we were not able to celebrate outside at the park, but were stuck inside.

first the kids and caregivers got to run some morning beans out in the gym. there were plenty of toys for all the kids to play with.

check out the beautiful hand collage the kids made; oddly, bear’s hand was missing two fingers! the kids put on a show for the adults. with the help of one of their AMAZING teachers they sung a few songs, which made me a little teary eyed. the cuteness was so overwhelming! 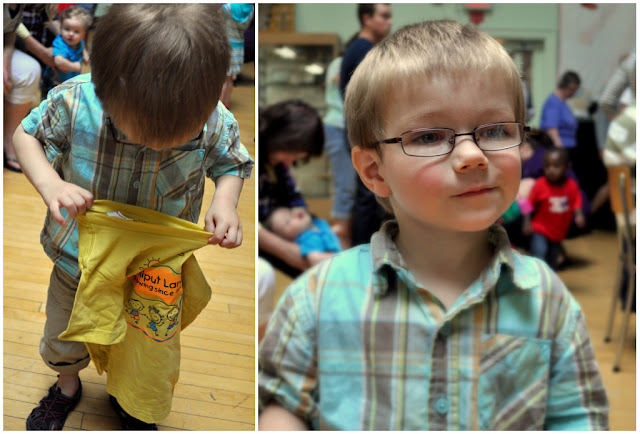 at the end of the performance each pre-schooler received a t-shirt with the school’s name on it and a bucket and shovel. pretty fancy stuff; bear was over the moon!


i’ve tried to explain to bear that he will not be going to pre-school for a few months as it is summer. he seems very confused. he’ll be back in the fall and won’t start real school until the fall, of 2012, which i am secretly relieved about. i’m not quite ready for him to grow up so fast!